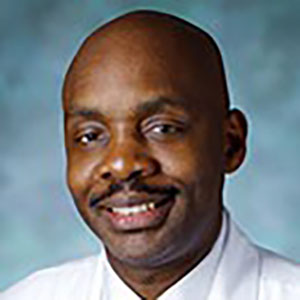 Dr. Richard Benson is Director of the Office of Global Health and Health Disparities (OGHHD) in the NINDS Division of Clinical Research. He is a leader in the fields of vascular neurology and health disparities research. His areas of research interest and expertise include: health disparities and health equity research, and minority, community, and global health. Dr. Benson has worked in the public and private sectors and is a volunteer with several professional organizations. He is a past president and current board member of the American Heart Association (AHA), Greater Washington Region (GWR). He was a member of the national AHA Stroke Council and is currently an American Academy of Neurology (AAN) Registries committee member. Dr. Benson received his B.S. in Chemistry from Fisk University, followed by an MD/PhD from Meharry Medical College in Neurophysiology (elected to AOA). Subsequently, he completed his neurology residency at the Harvard-Longwood neurology residency program in Boston, and a stroke fellowship at the Columbia University Neurological Institute in New York, while obtaining an M.S. in Epidemiology from the Mailman School of Public Health. After fellowship, Dr. Benson worked as a vascular neurologist in New York City at the Long Island Jewish Medical Center and St. Luke’s-Roosevelt Medical Centers. In 2005, he moved to the Washington D.C. area to work as a Program Director in what was then the Office of Minority Health and Research at the NINDS. He left the NIH in 2008 to focus on patient care, and in 2010 became Associate Medical Director of the NIH Stroke Program at Medstar Washington Hospital Center and Associate Professor of Clinical Neurology at Georgetown University Medical Center. Dr. Benson returned to the NINDS in 2019 to direct the OGHHD.