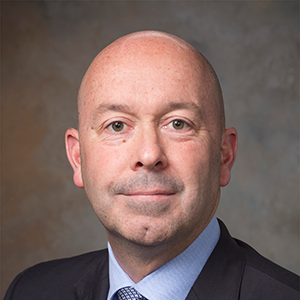 Dr. Kevin C. O’Connor is an Associate Professor of Neurology and Immunobiology at Yale School of Medicine. He earned a Bachelor of Science degree in Chemistry from the University of Massachusetts at Amherst and his Ph.D. in Biochemistry at Tufts Medical School. He received his post-doctoral training in Immunology at Harvard Medical School, after which he spent several years on the faculty as an Assistant Professor. He is now a faculty member at Yale School of Medicine where he pursues his investigative interests in human translational immunology and neurology. He and his group are specifically interested in defining the mechanisms by which B cells, and the antibodies they produce, contribute to tissue injury in human autoimmune disease. To this end, they are engaged in understanding how particular autoreactive B cell subsets and their antibodies initiate and sustain autoimmunity through studying human-derived specimens. The diseases on which their research is focused includes myasthenia gravis (MG), neuromyelitis optica spectrum disorder (NMO) and myelin oligodendrocyte glycoprotein (MOG) antibody disease.