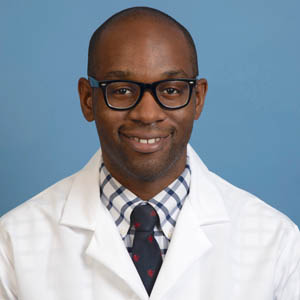 Dr. Daniel Okobi is behavioral neurology fellow and postdoctoral fellow at the University of California, Los Angeles and the West Los Angeles Veterans Affairs Medical Center. Growing up in New York, he was inspired in high school during a Columbia University science enrichment program by the mysteries of neurobiology and neurological disease. He attended Harvard College, where his love of systems neuroscience and behavior was nurtured in Florian Engert’s lab. Then he returned to New York to embark upon an MD/PhD program at New York University, where he worked on better understanding the neural control of singing in birds and mice in Michael Long’s lab. After graduation, he continued his clinical training in internal medicine at the University of Miami and neurology at UCLA, where he completed his neurology residency. He stayed in Los Angeles, working with Mario Mendez for subspecialty training in behavioral neurology and neuropsychiatry. His current research in Peyman Golshani’s lab attempts to better characterize both early behavioral abnormalities and neuronal network dysfunction in a mouse model of frontotemporal dementia.